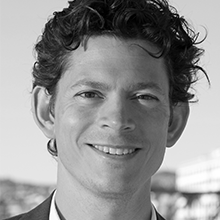 Thomas Goetz is the co-founder and CEO of Iodine, a digital health company helps people find what works best for them.

He previously served as the first Entrepreneur-in-Residence for the Robert Wood Johnson Foundation, where he created Flip The Clinic, an RWJ Signature Program working to transform the practitioner-patient encounter. His 2010 TED talk on visualizing medical data has been viewed half a million times.

Earlier he served as executive editor at WIRED, where he led the magazine to a dozen National Magazine Awards for print and digital excellence from 2001 through 2012. His writing has been repeatedly selected for the Best American Science Writing and Best Technology Writing anthologies. His new book, The Remedy: Robert Koch, Arthur Conan Doyle, and the Quest to Cure Tuberculosis, was chosen by Amazon as a Best Book of 2014. His previous book, The Decision Tree, was chosen by the Wall Street Journal as a Best Health book of 2010, and widely hailed as offering a new vision for healthcare in the United States. Thomas also writes the LaunchPad column for Inc. Magazine.